Spring semester your senior year of college. The final stretch. The last classes you’re going to take as an undergraduate. Just beyond these four months, the adult world is waiting. But, there are some things you have to get through first. Job applications, three weeks of almost non stop travel, memorizing the phases of mitosis, forgetting your blog password.

Yeah sorry about that.

I made the mistake of holding off on my lab science requirement until literally the last moment possible, so this semester my brain was playing host to different scientific theories that promptly exited the second I handed in my final. However, to make room for them we had to evict some things like important passwords. However, passwords have been reset and updates have been made – including a new domain name, look at my fancy .com url – so let’s discuss what’s been going on with me since February.

A boatload of travel

I mentioned it earlier, but three weeks into my final semester of college started what I like to call The Lindsey Tour of the South. The last weekend in February sent me to Georgia to be a part of the wedding of one of my closest friends. The setting was beautiful and it was awesome to celebrate something so great with some amazing people. Being able to catch up with friends I haven’t seen in a long

time was pretty fantastic as well. (Some people chuckled when I said I had to duck out of the post-rehearsal dinner celebration early to study but hey, responsibilities right?)

After my return to North Carolina from Georgia, I had a whopping four days on campus before I packed my bags and headed out of state again. This time on a bus with the rest of the Elon basketball band to support the men’s basketball team at the CAA tournament in South Carolina. So basically, I stood in an arena and played a song when I was told to, and had no clue what was going on otherwise. (For someone who knows nothing about sports I went to a lot of sporting events in my college career.) The team unfortunately wasn’t successful, but it was a fun trip to take. Following that tournament, there was another four day period on campus before we headed to Virginia for the women’s tournament. Those four days should’ve been quiet, normal routine days, right?

My computer decided that between travel, midterms and the general stress of college life, it was going to have it’s own little breakdown. And it died. No, not the “hey plug me in and let me cool off for awhile” died, but “congrats your hard drive is fried and everything’s due in a week!” died. Which led to me panicking and calling my dad all the way in Massachusetts, driving between school and the Best Buy down the street in the hour breaks between classes. This adventure led to me getting on another bus three days later with a new computer and a few gray hairs.

That trip with the women’s team was extremely successful, the women won their CAA tournament and made it to the first round of the NCAA tournament which meant, you guessed it. Another trip. This one led right into spring break, ending the Lindsey Tour of the South, and leading to a week of applying to jobs while watching Netflix.

Yeah that happened. After four years of hard work and a lifetime in school I am officially

done! …For the time being. The jury’s still out on whether or not I’m going to make the move to grad school, but for right now I’m trying to find a job. (which ps: if you’re a possible employer who found this blog via my resume – I’m great at Microsoft Office.) My entire family came down for the graduation weekend and it was a pretty fun weekend of celebrating – and packing my apartment but that wasn’t fun.

I decorated my cap as many graduates have been doing lately. I used an Alice in Wonderland quote (shocker right? Me quoting Alice in Wonderland?) and I thought it came out pretty great! Until I got to the gym the morning of graduation and I realized I had super glued it on my cap facing the wrong direction. That’s right folks I crossed that stage with my grad cap on backwards. Truly living the dream.

It’s still kind of a surreal idea, that I’m not going back to Elon in August for another band camp, another year at school. But it’s kind of exciting. Pretty soon I get to start working in the “real” world, which is terrifying, but also exciting to see what’s going to happen in the future, where I might end up.

I read a lot of books my spring semester, 13 total. Six books were introduced to me through the creative writing workshop for “required” reading, but half of those books I would’ve loved to have read even if they weren’t assigned. The other seven books I read I read via audiobooks, which I know some people don’t consider listening audiobooks  to be actually reading, but that’s a topic for another post.

Below you can find my list of spring reads in order of the Goodreads rating I gave them (spoiler alert: most of them are 4 stars – entries with the same rating are organized in the order that they were read).

Bobcat And Other Stories by Rebecca Lee 4/5 ★

*All my Friends are Superheroes by Andrew Kaufman 3/5 ★

*Something Wicked this Way Comes by Ray Bradbury 3/5 ★

Okay last thing and then I’ll be done, promise. It is the middle of June, so I figured it’s a good time to post my June To Be Read List. (No time like the present, am I right?) I’ve technically finished some of these books already but that’s okay!

The books I plan to read this month are (summaries pulled from Goodreads or the back of the book):

The Graveyard Book by Neil Gaiman

Nobody Owens, known to his friends as Bod, is a normal boy. He would be completely normal if he didn’t live in a sprawling graveyard, being raised and educated by ghosts, with a solitary guardian who belongs to neither the world of the living nor of the dead. There are dangers and adventures in the graveyard for a boy. But if Bod leaves the graveyard, then he will come under attack from the man Jack—who has already killed Bod’s family…

After pulling off a seemingly impossible heist in the notorious Ice Court, criminal prodigy Kaz Brekker feels unstoppable. But life is about to take a dangerous turn—and with friends who are among the deadliest outcasts in Ketterdam city, Kaz is going to need more than luck to survive in this unforgiving underworld.

On a damp October night, beautiful young Ashley Cordova is found dead in an abandoned warehouse in lower Manhattan. Though her death is ruled a suicide, veteran investigative journalist Scott McGrath suspects otherwise. As he probes the strange circumstances surrounding Ashley’s life and death, McGrath comes face-to-face with the legacy of her father: the legendary, reclusive cult-horror-film director Stanislas Cordova—a man who hasn’t been seen in public for more than thirty years.

The Twelve Lives of Samuel Hawley by Hannah Tinti 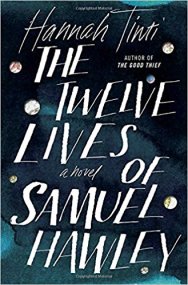 After years spent living on the run, Samuel Hawley moves with his teenage daughter, Loo, to Olympus, Massachusetts. There, in his late wife’s hometown, Hawley finds work as a fisherman, while Loo struggles to fit in at school and grows curious about her mother’s mysterious death. Haunting them both are twelve scars Hawley carries on his body, from twelve bullets in his criminal past; a past that eventually spills over into his daughter’s present, until together they must face a reckoning yet to come. This father-daughter epic weaves back and forth through time and across America, from Alaska to the Adirondacks.

Geektastic: Stories from the Nerd Herd edited by Holly Black and Cecil Castellucci

A compilation of short stories that celebrates all things geeky, from Klingons and Jedi Knights to fan fiction, theater geeks and cosplayers. Whether you’re a former, current or future geek, or if you just want to get in touch with your inner geek, Geektastic has something for everyone.

And that’s officially the end of this spring wrap up! Super excited to spend more time with this blog and just read a whole lot more in general.